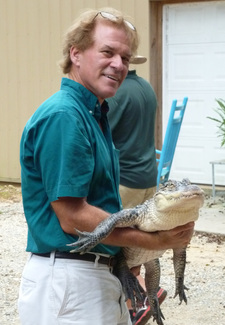 I grew up in Cazenovia, New York (near Syracuse), where my family had a small horse farm.  With earlier expectations of becoming a horse veterinarian, I started at Michigan State University, however then transferred to Syracuse University, before transferring to the State University of New York (SUNY) College of Environmental Science and Forestry where I graduated majoring in Forest Biology.  A renewed interest in animal behavior and reptiles lead to a M.S. in Zoology at the University of Oklahoma with Charles Carpenter.  I continued west to UCLA for my PhD with Laurie Vitt where I compared the activities and energetics of the sympatric sit-and-wait foraging sidewinder (Crotalus cerastes) and the active foraging coachwhip (Masticophis flagellum).  Following my PhD, I continued at UCLA in the Department of Physiology in School of Medicine in a postdoc with Jared Diamond. There my interest and work changed to integrative physiology as we discovered the unprecedented regulation of gastrointestinal performance exhibited by infrequently feeding snakes.  This lead to the developing of the Burmese python as a model of extreme physiology.  Since, I have continued my comparative and integrative studies exploring the evolutionary and proximate mechanisms of intestinal response through my first faculty position at the University of Mississippi and now at the University of Alabama.  I have always been fortunate to have experienced the mentoring and opportunities to explore and discover unique biological phenomenon.
CV link 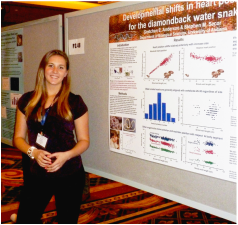 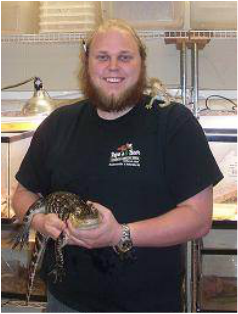 Matthew examined the estivation physiology of the three-toed amphiuma.  He found that in contrast to sirens, amphiumas do not form a cocoon during estivation and experience little alteration in metabolism and tissue performance with estivation.

Matthew's publication while in my lab 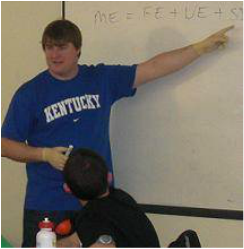 Scott’s publications while in my lab.
Bessler, S. and S.M. Secor. 2012. Effects of feeding on luminal pH and morphology of the gastroesophageal junction of snakes.  Zoology 115:319-329. 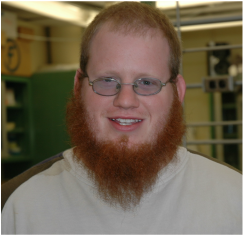 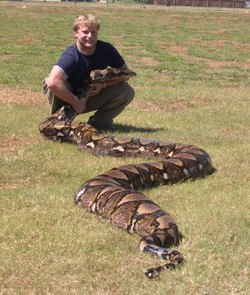 Current and recent undergraduates working in my lab 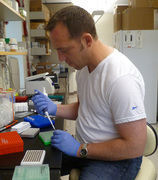 Todd Castoe, Department of Biology, University of Texas at Arlington. 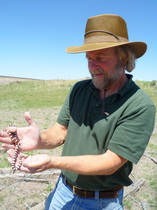 Steve, Todd Castoe, and I are examining changes in gene expression with feeding and fasting for the western rattlesnakes (Crotalus viridus) 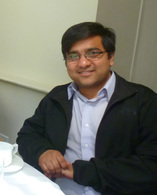 Amit Choudhary, Broad Institute, MIT, Harvard University
Amit and I are investigating the interactions between python plasma and the trophic response and performance of human pancreatic beta cells.  Beta cells when exposed to plasma from fed pythons increase in size and insulin production.  Python plasma also provides protection to beta cells from lipotoxicity. 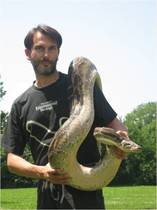 Jean-Herve and I have explored the morphological as well as functional changes of the gastrointestinal epithelium of the pythons with feeding and fasting using scanning electron microscopy (SEM), transmission electron microscopy (TEM), and immunocytochemistry.  We have also described a unique cell type in the intestines of vertebrates that is involved in intestinal calcium sequestering and release. 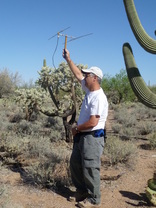 Together with Dale’s lab, we have explored for the Gila monster the regulatory role of their saliva protein Exendin-4 on their digestive performance.  Exendin-4 when administered to diabetic mammalian model stimulates insulin production and lowers blood glucose levels.  Still unknown is the function of this protein for the Gila monster.  We have also examined the postfeeding morphological and functional responses of the intestine of the western diamondback rattlesnake to feeding and fasting and the presence of a water storing bladder in viper boas

Dr. Wrangham proposed that the onset of meal cooking had a major impact in human evolution.  With cooking, there is a reduction in the cost of eating which lead to numerous beneficial social and life history advances.  Together with Rachel Carmondy, we demonstrated the energetic benefits of a cooked diet versus a raw diet for the Burmese python and bearded dragon.
Dr. Leslie Leinwand, Department of Molecular, Cellular, and Developmental Biology, University of Colorado

We collaborated with Dr. Leinwand’s lab to investigate the signaling mechanism underlying the rapid hypertrophy of the python’s heart after feeding, work that was published in Science in 2011.
Dr. Rob Knight, Department Chemistry and Biochemistry, University of Colorado

Working with Rob and Elizabeth Costello in his lab, we characterized the postfeeding remodeling of the gut microbiota for the Burmese python, published in ISME in 2010. 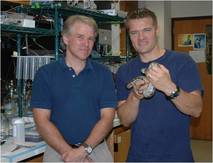 With Dr. Grosell’s lab, we examined postfeeding changes in gastric and intestinal metabolism and the capacity for gastric acid and intestinal base secretion of fasted and fed pythons and diamondback water snakes (published in JEB 2012).  With Andrew Esbaugh (currently at Univ Texas Marine Science Institute), we characterized circulating carbonic anhydrase and renal plasticity in the Burmese python (two papers published in CBP).